As the 2018 Argentine Presidency of the G20 draws to a close, this post looks back at some of the highlights from the work of the 2018 Think-20 Engagement Group’s Task Force on Gender Economic Equity (GEE).

In my capacity as CEO of Women’s Economic Imperative and Chatham House Fellow in the Gender and Growth Initiative, I had the privilege of serving as Co-Chair of the Task Force along with Gala Díaz Langou, Social Protection Program Director, Senior researcher, Center for the Implementation of Public Policies Promoting Equity and Growth (CIPPEC).

The membership of the Task Force consisted of 56 thought leaders representing over 40 Think Tanks and related organizations in 19 countries. In addition, the Task Force worked closely with the leadership and members of the W20 to agree on an agenda and collaborate on critical elements of our work.

In 2018 under the Argentine Presidency of the G20, the theme of “BUILDING CONSENSUS FOR FAIR AND SUSTAINABLE DEVELOPMENT” was established based on the fundamental assertion that ‘Growth that is fair, as well as sustainable, is the pillar of development’. It was recognized that the empowerment of women – roughly half of the world’s population – is critical for global economic growth and sustainable development for the benefit of all – men and women, girls and boys. Hence the commitment of the Argentine presidency to fostering a gender mainstreaming strategy across the whole G20 agenda and boosting “women’s empowerment, the elimination of gender disparities in employment, science, technology and education, and protection from all forms of gender-based violence.” 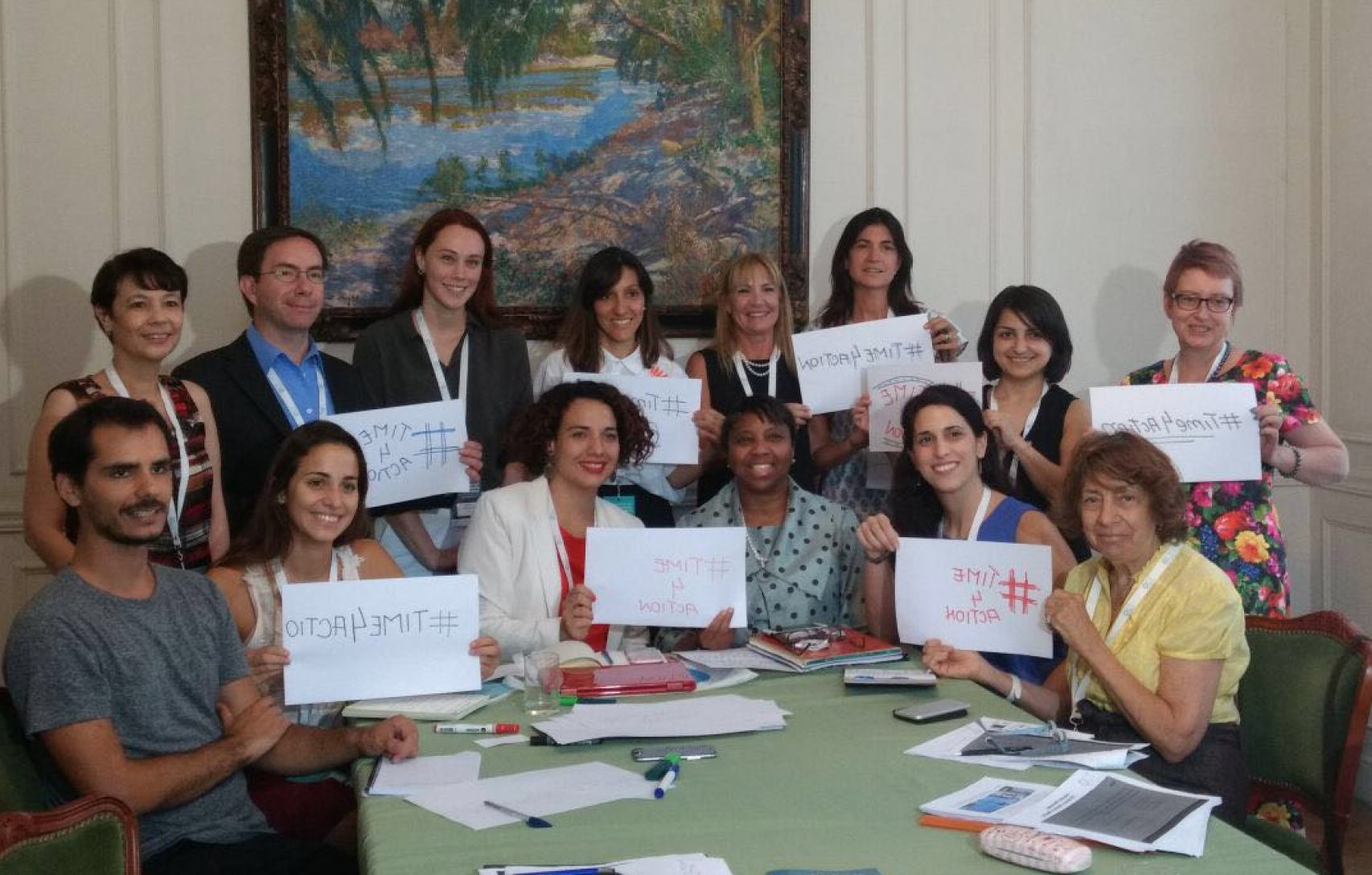 The agenda for the GEE Task Force was defined in collaboration with the W20 and was framed by the four priorities of the W20:

With the agenda set, the Task Force began its work by:

The Kiel Institute’s Global Solutions Summit brought together policy leaders from around the world.  German Chancellor Angela Merkle delivered the keynote address on the first day of the Summit. It provided an excellent forum for discussing the work of the Task Force and getting feedback on our proposed approach to tackling the key issues. We had a vigorous, plenary discussion on gender economic equity – issues and challenges, following the keynote address of Chancellor Merkle. This session included:

The Task Force was actively represented by the participation of members from several countries including Argentina, India, Mexico, Scotland, South Africa, and Wales.

At the beginning of their respective 2018 presidencies, Canada (G7) and Argentina (G20) both announced a cross-cutting approach to gender equity in their agendas. Through a series of consultations and discussions, including the event convened by Chatham House in Ottawa, there has been significant convergence on key focus areas and recommendations for action.

This consultation brought constituents from academia, civil society, together with high-level government officials representing Canada, France, Indonesia, People’s Republic of China, among others.

A representative of Canada’s G7 Summit team presented the strategy behind the W7 Summit held the previous week and the consensus outlined in the W7 Communiqué. We discussed the importance of continued alignment between the G20 and the G7 agendas on gender economic equity. 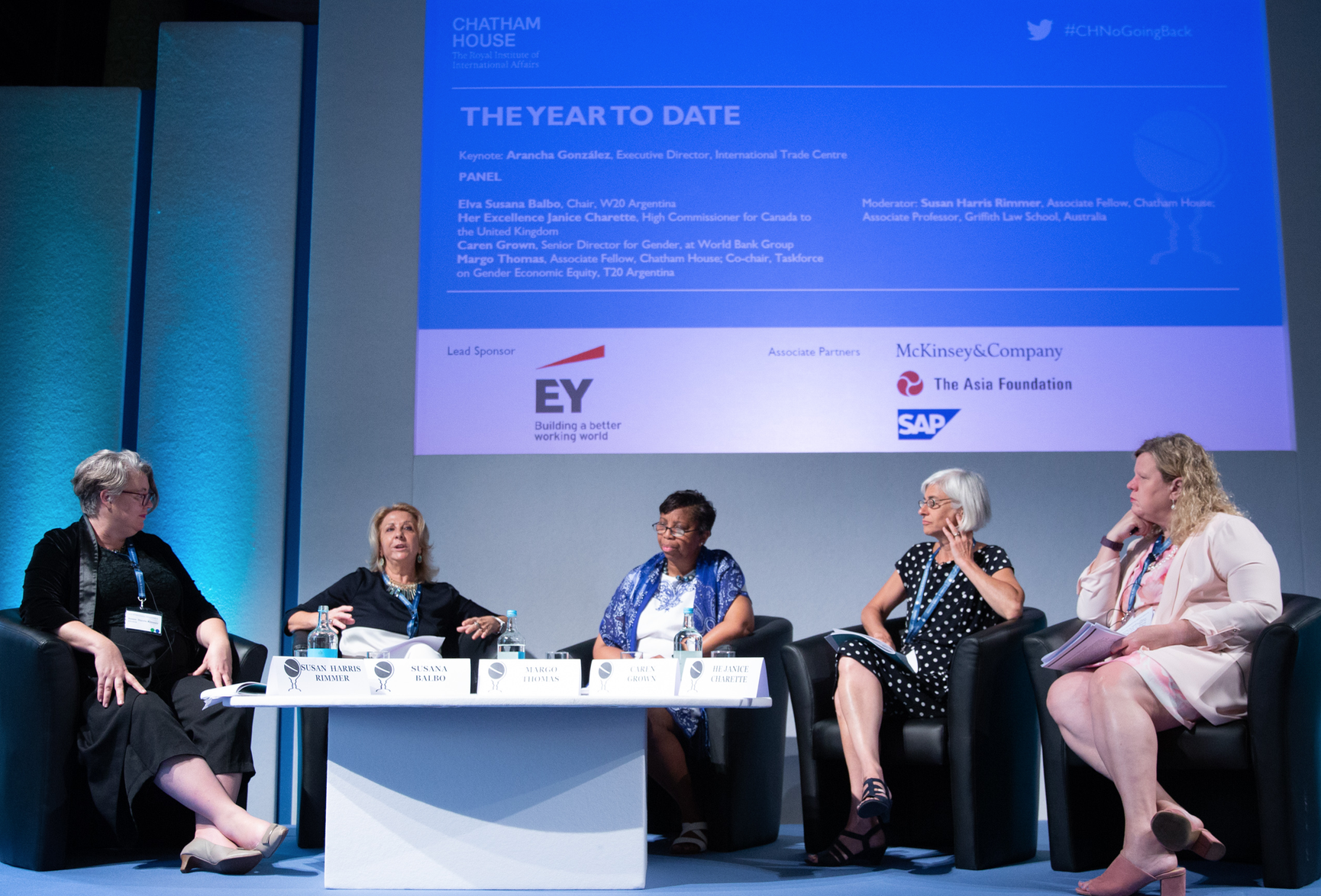 Following a Keynote delivered by Arancha González, Executive Director, International Trade Centre, our  panel discussion continued the Ottawa Consultation discussion on the agenda-setting work of the UN Secretary General’s High-Level Panel on Women’s Economic Empowerment, and the importance of continued alignment across the G7 and G20, as well as across various engagement groups including the T20, and W20, for building consensus and increasing the chances for concrete outcomes and impact. The Panel comprised of: Susana Balbo, Chair, W20 Argentina; Her Excellency Janice Charette, High Commissioner for Canada to the United Kingdom; Caren Grown, Senior Director for Gender, at the World Bank Group; and Margo Thomas, CEO Women’s Economic Imperative, Associate Fellow, Chatham House, and Co-chair, Taskforce on Gender Economic Equity, T20 Argentina

The CALL TO ACTION of the T20 Task Force on Gender Economic Equity can be summarized as follows:

This call to action is based on the findings and recommendations reflected in the Policy Briefs prepared by the Task Force. As part of our active collaboration with the W20 and other engagement groups, two of the policy briefs focusing on Financial Inclusion and Care were joint products.

In addition, several of the Policy Briefs have been published in the Global Solutions Journal.

The Communiqué issued by the G20 Heads of Government at the conclusion of their meeting in Argentina was an important step in the right direction in addressing the key issues covered by the work of the T20, W20 and other engagement groups on gender. However, as Japan takes the helm, we must continue to focus on concrete action, building coalitions across constituencies and engagement groups, and measuring progress.

In summary, the communiqué affirmed that “Gender equality is crucial for economic growth and fair and sustainable development” and committed to “promoting women’s economic empowerment, including by working with the private sector, to improve labour conditions for all, such as through access to quality and affordable care infrastructure and parental leave, and reducing the gender pay gap” while considering “how to better engage with women entrepreneurs.”

Join us as we move ONWARD TO JAPAN!