An innovative project launched by the British Embassy in Lima seeks to encourage more women to establish and grow businesses in non-traditional sectors, including the extractive industries (oil and mining), STEM (Science, Technology, Engineering and Mathematics) sectors, environment, agroindustry, construction and financial services. 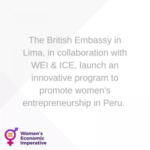 Research into male and female owned businesses has identified strong sectorial differences, highlighting that manufacturing industries, high technology sectors and construction are typically male dominated, whereas women entrepreneurs are more likely to establish businesses in the service industries or in retail[1]. The same patterns can be observed across Europe, where men owned businesses predominate in the construction, manufacturing, transportation and storage industries, whereas women gravitate towards areas related to health and social work, and other service sectors[2]. A similar phenomenon can be discerned in Latin America and the Caribbean, where women owned businesses tend to be much less represented in the sectors with higher productivity[3].

So why is it that comparatively few women elect to establish their enterprise in these sectors? Reasons include the lack of education and training in related fields[4], lack of successful female role models in these sectors, lack of appropriate sector-based contacts and social capital[5], as well as insufficient capital to invest in the start-up and in the further growth in the business. These barriers notwithstanding, when women do run businesses in “non-traditional“ sectors, they generally report better results in terms of turnover and profitability. In fact, a study by the Gender Innovation Lab in 2011 found that the profitability of Ugandan women entrepreneurs in non-traditional sectors was similar to the profitability of businesses owned by men, but triple that of women in more traditional industries. In addition, women in non-traditional sectors were able to establish larger firms.

It follows that encouraging women to establish companies in non-traditional industries can contribute to closing the gender gap[6]. Actions that could help women entrepreneurs choose one of these sectors include raising awareness of their relative profitability, engaging men who can introduce women entrepreneurs to appropriate networks and potential sources of finance, and helping women to improve their negotiation skills and ability to overcome discrimination[7].

The innovative Programme that is being launched through the British Embassy in Lima, in collaboration with WEI and ICE, is a response to this challenge. It is based on a framework that recognizes the impact of internal and external factors and takes into consideration the time limitations of the owner manager. It assesses both the current performance of a business, and its potential for growth, while taking into account that aspirations for growing a business are often constrained by the actual capacity of the business, i.e. lack of finances, people, management capacity and ‘knowhow’.

100 women, whether they are thinking about setting up a business in one of these sectors or are already in the process of doing so, will benefit from participation in practical awareness seminars to help them firm up their business idea and identify the resources they will need to make their dream a reality. 20 women in the early stages of running their business will participate in a practical programme that includes workshops where they will learn to use tools and techniques to help them prepare their business for growth and build their social capital through networking and mentoring support. And 10 women with established businesses in this sector will have the opportunity to participate in a proven growth programme, which was initially developed by Professor Allan Gibb and his team at the world-renowned Small Business Centre at Durham University in the North East of England, and has been delivered all over the world during the last two decades. This group of Peruvian entrepreneurs will also have the opportunity to travel to the UK, where they will meet their mentors and participate in a number of workshops and other events.

If you are a woman entrepreneur in a non-traditional industry in Peru and are interested in participating in this initiative, please click the following link to find more details of our program “Women Entrepreneurs – Going for Growth“, or contact Graciela Hijar at the following email: graciela@weiforward.org, or call on 933819122. The deadline for applications is 31st August 2018.

[3] World Bank. (2010), Women’s Economic Opportunities in the Formal Private Sector in Latin America and the Caribbean: A Focus on Entrepreneurship